A magical Winter-Wonderland in the North of Europe, Lapland, is an exciting place to spend a winter holiday – a place that I myself visited in December 2016.

Having been a good boy all year I was not hesitant about meeting Santa at all! I was, however, hesitant about the trip to Lapland in general as I figured it would be queues of people for everything, terrible food and accommodation reminiscent of a stable (which was fairly apt for this time of the year) – however I was totally wrong!

My 3 days, 2 night adventure with Santa’s Lapland Tours (which you can now book with me for a discount) was all set to depart out of Newcastle on a direct flight to Ivalo on the 22nd December, meeting the BIG man himself on the 23rd – the night before he was due to drop off presents to boys and girls all over the world!

I arranged to meet my colleague, Ben, who was traveling with his 10-year-old son Oliver, who still believed, which was perfect, as I also got to see the trip through a believer’s eye.

Ben only told Oliver at the airport where he was actually going on his winter holiday and his face was a picture – trying to be a cool 10 year old but you could see he was even more excited than I was!

We arrived after a direct, 2 and a half hour flight over the Arctic Circle into Ivalo airport. It’s tiny but very well set up for the plenty of charter flights it receives during the 6 week rush for Santa and the occasionally flight to and from Helsinki, Paris, Frankfurt etc.

Whist waiting for our bags, we were greeted by Elves singing carols and ushered onto coaches as we walked past Rudolph and his reindeer friends, handled by guys in traditional Lapland costumes. It was the perfect start and just a taster of what was around the corner.

We all boarded our buses and took in the scenery for the 25-minute transfer to Saariselka. It was like driving through Narnia; snow everywhere, fur and pine trees fringed with more powder-white snow, the occasional cabin in-between the trees with fairy lights twinkling away.

Upon arrival into the resort, we were ushered to a store to do our best Michelin man impressions as a bunch of elves took one look at us and gave us a suitable suit to keep us warm for the next few days – how they actually did it was unbelievable, one glance and we were given a massive overall, thermal socks, boots and gloves! Other than the one-minute walk from the airport to the coach you are not exposed to the winter elements, so there’s no need to go out and spend a fortune on clothing before you go.

The art of keeping warm under the suits is layers. You will just need leggings, thermal long johns if you have them, a vest, T-Shirt, a sweatshirt and a jumper underneath the thermal snowsuit you are issued with and you will be as warm as toast!

The resort was made up of a few hotels, gift shops for the kids and a couple of restaurants and bars (for the adults!) There was no such thing as cars there; instead your chosen mode of transport is plastic toboggans, which are everywhere for anyone’s use. The kids loved it – being towed about everywhere – in fact Oliver found it difficult to actually walk anywhere when we got home! But if riding around in a toboggan all day doesn’t get you excited then there is also a toboggan run situated in the corner of the resort – great fun for kids and adults alike!

The first afternoon was free – and with the snow all around you it’s enough for the kids to do for a couple of hours. Prepped in our winter thermals we played around in the snow for hours without feeling the cold too much – there are people everywhere doing snow angels, sliding down the slopes, tobogganing or just enjoying the fresh air and snow in general.

Be aware there is little light during the day in Lapland. We arrived around 11am but it felt like 7 in the evening, and by around 5pm (still before dinner), you feel as if you should be going to bed! Maybe it was Lapland telling us we needed to be asleep before the big day tomorrow.

We were given a bit of time before we departed for the day, so we had an early breakfast – which, like the dinner the night before, was nothing to shout about, but nothing to complain about either. There was a small selection but something for everyone at least. And then we boarded our bus to be given a full briefing on what to do and how best to utilise our time when we got to the Arctic Circle centre.

(Kids don’t read this!) Adults can also remain in the bus, to be informed how to give their prewritten letters to Santa so it looks as if they had been posted. Meanwhile the kids are outside singing Christmas carols with the elves.

We headed down to the centre to do some ice fishing and play ice hockey before waiting in line for about 10 minutes (the only time we had to wait for anything) to board the sleighs where we could explore the Finnish wilderness on our search for Santa.

As we rode through the forest we passed an upturned sleighs with presents that had fallen out – Santa obviously had too many Sherries! We quickly arrived at a little cabin, covered in snow with excited elves prancing around outside.

We walked through the door to see him, sitting in a rocking chair with a raging fire in the corner, big red and white suit hanging on a hook and a magical Christmas tree, along with a pile of presents wrapped in blue or pink wrapping paper for obvious reasons.

Softly spoken with a Finnish accent, he produced the letter that Oliver had written previously – again his face was a picture. When we left Oliver said ‘I know that was the real Santa as he was just like the one on all the Christmas cards” bless him – he even fooled me to be fair! 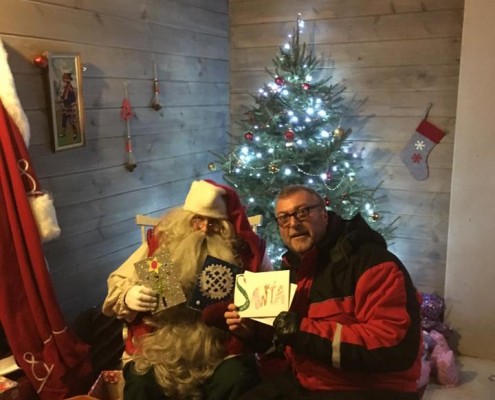 After Santa, we wandered over to the Ice Bar – an igloo with ice sculptures and of course, a bar for more €5 beers and the chance to thaw out a little. They also served hot chocolate for additional thawing.

We wandered back to the top of the snowy hills as we had a time slot for our Husky Sleigh Ride (the only activity you need a time slot for!) I was in a sleigh with my other colleague Megan and her adorable daughter Lilly, who at 20 months, had been pulled around in a toboggan since our arrival as they are easier to handle than a buggy/pushchair, and besides, the airline had left it in Stansted!

Visiting Lapland was a fantastic experience, for both the adults and children! And it’s easy to see why the locals speak of Lapland’s wilderness as a place ‘of strange magic’. From everlasting daylight in summer to the natural phenomenon, Aurora Borealis, in winter, Lapland is full of magical experiences that everyone in the family can enjoy.

Here are some of the best winter activities in Lapland that you need to try.

A natural wonder of the world, the Aurora Borealis is one of the massive lures to Finland. It occurs throughout the winter, during November to April, most commonly seen between 5pm and 2am. There are plenty of Northern Light tours to take you away from artificial light and give you the best chance of seeing this natural phenomenon. The tours include everything from evening snowmobile safaris to guided snowshoe adventures, or for those who don’t fancy braving the cold, you can stay in a glass-ceilinged igloo, where you can gaze at the night sky from the warmth of your bed.

In Lapland, the locals often use snowmobiles to get around, using the massive network of snowy trails that extend past forests, frozen lakes and over the icy hills. It is because of these extensive tracks that it makes this the perfect way to explore the region. 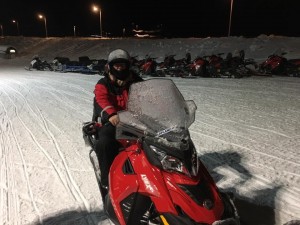 A far more traditional way of traversing the snow-covered landscape is by sleigh, specifically pulled by a team of huskies that were bread to pull heavy loads in harsh conditions in Siberia. Pairs of dogs, typically three or four couples, will pull the two-man sleigh through the snowy tundra, following the lead slay. It’s an exhilarating experience, hurtling through the snow, but don’t expect peace and quiet! As they run, the dogs excitedly yap and bark, filling the idyllic surrounding with noise. 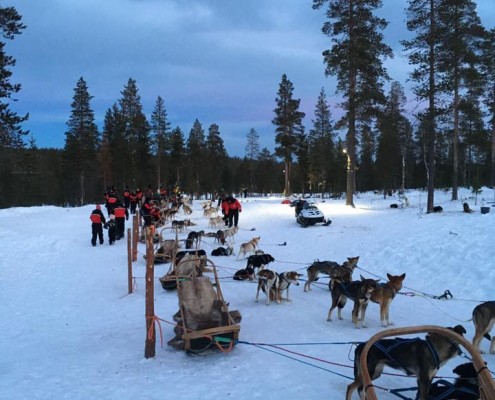 For those who prefer the slow lane, a reindeer sleigh ride will be right up your street. Again, reindeer sleigh rides are a traditional way of transport for Lapland locals, who have depended on reindeers to get them around for centuries. In a stately procession, a single reindeer pulls open sleigh while you are tucked up warm in a bundle of furs. While it may not be the fastest of rides, you will enjoy the smooth, quiet and magical landscape from the comfort of your own toboggan.

It wouldn’t be Lapland without popping to see the big man himself! The Santa Claus Holiday Village is a unique experience for adults and children alike; from cozy, cabin-like restaurants to exhilarating sledging down the snowy slopes. But a trip to Santa Claus’ Village wouldn’t be complete without knocking on Santa’s office door to meet the man in red.

Planning the Perfect Honeymoon with TravelSnob